Over the past six weeks I have been harassed and subjected to insulting and defamatory comments via email and social media.  Originally I thought it beneficial to name the person / people / organisation doing this, but what I have realised is that provides them with more “air”, and would mean I am stooping to their level, which goes against what I promote and would make me a hypocrite.

I was invited along with two other respiratory patients,  to France to ride in what I thought was an awareness ride for respiratory disease patients. We cycled under the banner of the COPD World Team.

On my return to Australia I was emailed demanding my lung function tests. It had been decided I was probably a stage 2-3 COPD patient or just had asthma. I was informed the “COPD World Team” wanted answers along with thousands of others about how I performed so well in the event.  I think it reasonable to expect that prior to being invited to such an event, one would have completed their “due diligence” and would be completely converse with who I am, what I say I am, and what my disease is, not after the event is completed and I have returned to Australia.  Again, I confirm I was invited to attend this event. At no stage did I ask to go – they contacted me and asked me to attend a fully funded event.

These cyber trolls fail to understand the level of fitness needed to complete 3 Ironman events and 2 marathons is far more than what’s need to ride 46 kilometres. An Ironman cycle leg alone is 180 kilometres.  I initially refused to provide this information, as medical records are very private information and I suspected it wouldn’t be used in a meaningful way. After persistent harassment and threats, I agreed to provide a doctor with my medical details and a report from my respiratory specialist with his diagnosis, but told the doctor the details should not be shared with anyone else, as I have a firm belief a person’s medical data, is exactly that, personal and none of anyone else’s business.

I awoke last Saturday morning to a post on the relevant FB page stating “Breaking News”. These bullies was telling the world I hadn’t provided them with adequate details about my disease status and it was still in question. As well as this, I was being black banned by his organisation. I’d already told them several weeks earlier that I had no desire to be a part of his team or organisation, as they didn’t hold the same agenda or standards I do. It was also stated that if I didn’t provide more detail he will be sending out a press release in 7 days, Friday November 18.

The information which had been provided to their doctor is the same as I have provided all medical professionals when entering a race, as they require this information to verify my condition and whether, in their opinion, I can safely compete. Doctors have always been able to determine my health status with this information up until now, and have admired what I can do with my level of disease. Apparently, this specific medical person does not hold the same skill level to enable them to determine my diagnosis with the same information.

COPD should never be a competition about who is the sickest. Our disease is individual and varies from patient to patient. I know COPD patients whose exercise performance is far greater than mine, just as mine is greater than others. You can never compare performances of patients with respiratory disease as we are all different. What we should be doing is encouraging other patients to take charge of their disease, eat well, exercise well and live a better quality of life!

Below is the latest up to date definition and grouping/staging of COPD from The Global Initiative for Chronic Obstructive Lung Disease (GOLD). It contains the old staging system and the new group system. The pages following are my pulmonary function and exercise testing from last year. My FEV1 over the last 5 years has varied between 22% and 30% but generally 1lt or under. These tests were carried out 5 weeks prior to my run in the 2015 New York marathon and show improved exercise test results after a 26-week training program.

The purpose of this post is to “set the record straight”.  It is not to vilify another COPD patient, but to confirm the facts and not promote the lies any further.  I have been accused of being a liar and a fraud and in the latest post “a monster”.  Perhaps it’s time to realise I am not the only person being impacted by this nonsense.  My wife, my children, step children, siblings and elderly parents along with extended family and other COPD patients have been reading all of the horrific things being purported about be.

This will be the last time I am in communication with or about this issue.  The black ban from this organisation can continue all  it likes and I will not be entertaining it any longer.  It is a negative and pointless waste of my time.  It only serves to hurt my family and my friends in the COPD World, whom I have far too much respect and affection for.  No negative or derogatory comments will be acceptable on this post, and if made will be deleted immediately upon being seen.

I am supported by my team of medical professionals and corporate sponsors in Australia and New Zealand; people and organisations, as detailed on my page, who recognise my authenticity and the integrity of what I am doing to help people with Lung disease : use positivity, exercise and nutrition to improve their lives.   NEVER LET YOUR DISEASE DEFINE YOU!!

All topics are updated as new evidence becomes available and our peer review process is complete.

COPD — The Global Initiative for Chronic Obstructive Lung Disease (GOLD), a project initiated by the National Heart, Lung, and Blood Institute (NHLBI) and the World Health Organization (WHO), defines COPD as follows [7]:

“Chronic obstructive pulmonary disease (COPD), a common preventable and treatable disease, is characterized by persistent airflow limitation that is usually progressive and associated with an enhanced chronic inflammatory response in the airways and the lung to noxious particles or gases. Exacerbations and comorbidities contribute to the overall severity in individual patients.”

The GOLD expert panel classified COPD into 4 or 5 stages, ranging from 0 to 4:

In bold type is the corresponding group/stage which is circled on my respiratory function test. 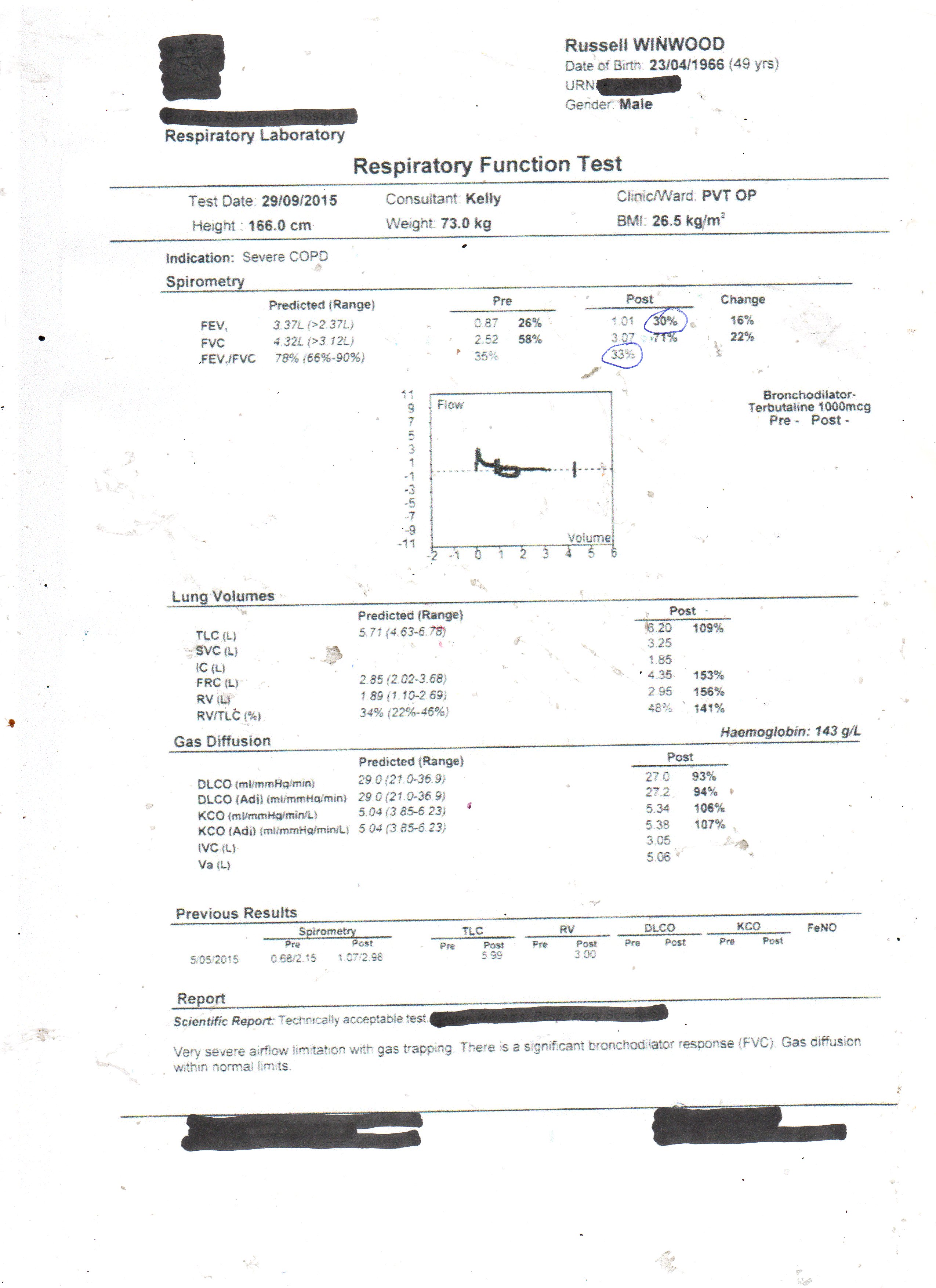 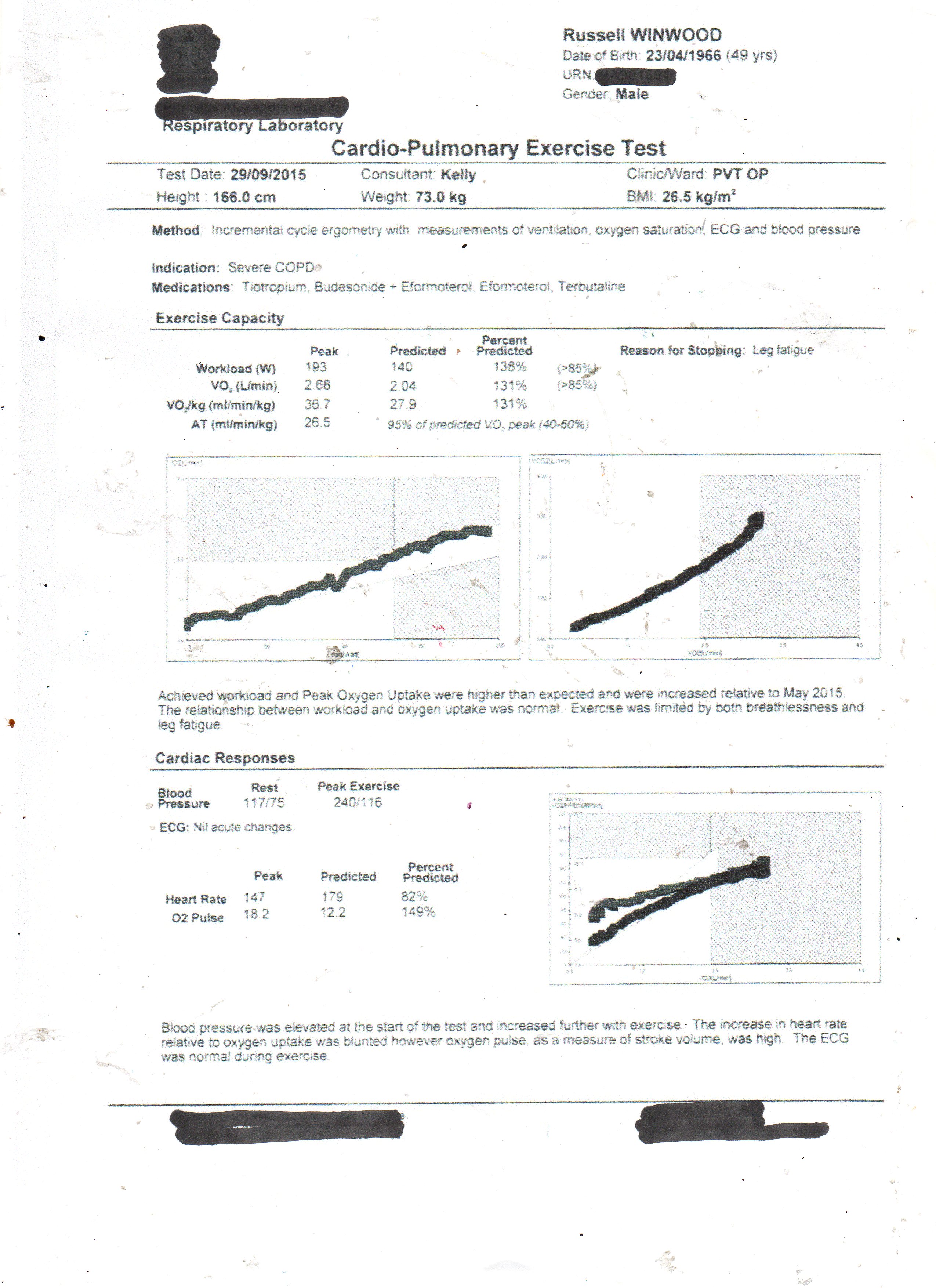 Four years ago, I started using the ketogenic diet to help manage my COPD. In this challenge I want to share with you my experience with a range of diets I have tried and how they can improve your symptoms and quality of life. To begin with I’d like to make a couple of … Continued

Since COVID-19 started I have seen an increase in patients looking for advice on how to protect themselves from this killer virus. What we are learning about this virus is, it’s frequently changing, but one thing stays the same. We can manage our risk exposure! For those patients who have been living with COPD … Continued

On Wednesday November 20th we celebrated World COPD Day around the world. On the same day a patient friend posted in a COPD Patient FB group. When I read this post it brought a tear to my eye. Not just because of the outpouring of frustration and desperation in her message, this patient spoke … Continued

Each year there is a theme for World COPD Day. This year’s theme in my view is very relevant to how we should approach COPD (chronic obstructive pulmonary disease), now and into the future. Bringing patients, healthcare professionals and researchers together in the fight against this debilitating disease can only lead to better outcomes. … Continued

14 responses to “Setting the record straight!”