In 2017 I ran the London marathon in a time which I had previously thought out of my reach. Fast forward 18 months and two marathons later and I have not been able to reproduce the London time. While I’m disappointed in my results for the current marathon season, I’m well aware all the planning in the world gives no guarantees of success.

Marathons require many months of training and preparation for an event, but for a COPD patient there are extra demands and precautions. My own training plan stretches over 26 weeks and has peak training phases which are very demanding on my body. In these training peaks its crucial I maintain a high level of wellness as this is the time where my immune system takes a pounding.

The same rules apply to healthy athletes, however in the case of someone with severe respiratory disease falling ill when your body is under such stress can mean hospitalisation and the end of training for the event.

Some of the marathons I compete in are in other countries so there is an extra burden of maintaining wellness while travelling to the other side of the world. For those of you who have experienced long haul flights on oxygen you’ll know what I’m talking about. Don’t get me wrong, I love competing in marathons around the world and consider myself fortunate to be able to do so.

Training for this season’s marathons were a little challenging as it meant training through our Australian summer. The heat and humidity on some training days were savage. I ended up doing many training runs at night time to avoid the heat of the day. While this helped, our summer nights can still be hot and humid. 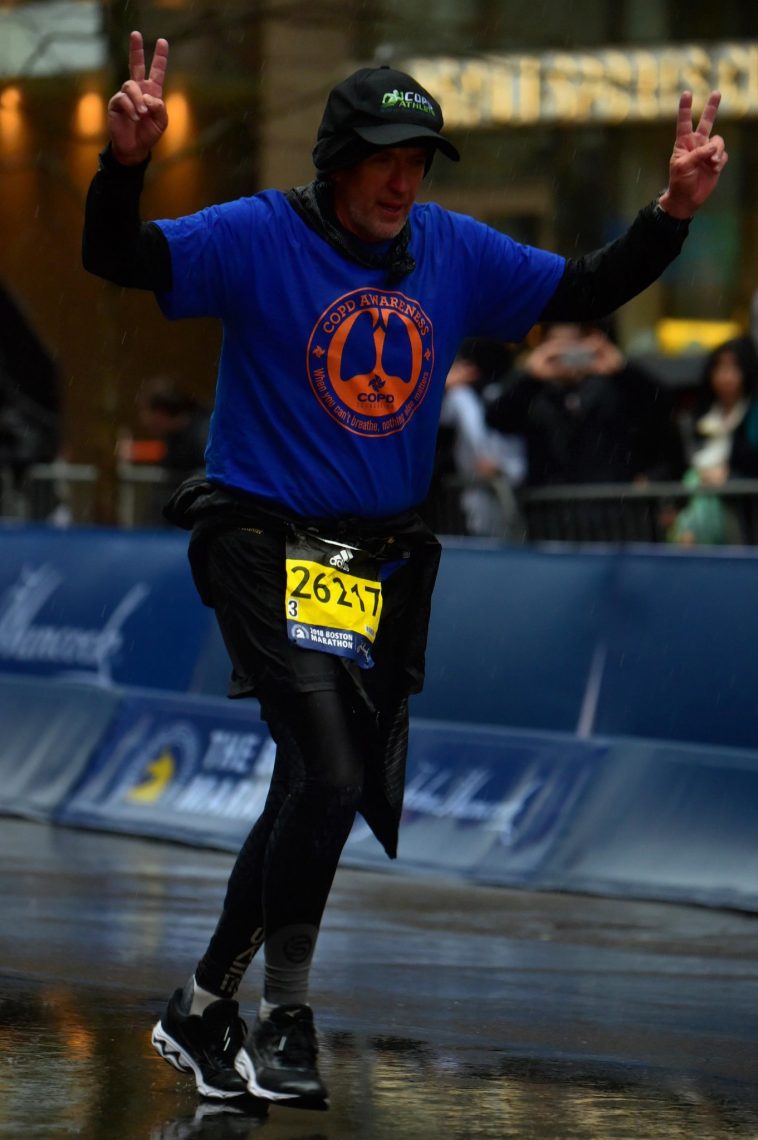 In a nutshell, COPD. This disease is so unpredictable and when you are running marathons you always have to err on the side of caution. The extreme weather conditions which hit Boston on marathon day 2018 meant self-preservation was paramount for me. When you travel to the other side of the world to race you always want to make sure you finish.

While my time for the Boston marathon was not what I was hoping for I was happy in the way I managed my race and recovery. Any race is a successful race when you come out unscathed.

The Gold Coast marathon was a different story. Weather had nothing to do with my slow time. I felt a little more breathless than usual at the start of the race but thought it was just something in the air and once I got started I’d be fine.

My race turned pear shaped  in the first kilometre with my oxygen levels dropping significantly. I was finding every time I picked up the pace my oxygen levels dropped. Time again for some self-preservation. My race continued with a pattern of slowly jogging and walking resulting in my slowest time for this race.

While I recovered well after my race I have come to the realisation future marathons may well have to be done with an oxygen back pack. While I didn’t achieve my time goals in this marathon season I did finish both races. Last year I had the worst exacerbation since being diagnosed with COPD and thought my marathon career was over. So, all things considered I’m just happy I’m back competing.