The 23rd of April 2017 will be forever a fond memory in my mind, not only was it my birthday, but I  was also running the London marathon with another respiratory patient. This wasn’t a first, Stephen Gaudet and Mike McBride completed the Boston marathon in 2009, both respiratory patients and veteran marathoners. These two legends have inspired a number of respiratory patients to take on endurance challenges and to show the world that you should never be defined by your disease.

Sarah Greenhalgh is a respiratory patient from the United Kingdom who I’ve been chatting with for over a year via emails. When Sarah first told me she was going to run the London marathon I was so excited for her. The challenge of running these events is not only a triumph for what the mind can harness the body to do, but shows other respiratory patients just what is possible.

I had told Sarah I too had planned to run the London marathon but probably a year or two after her run. As it turned out Sarah decided to defer her 2016 entry and run in 2017, at the same time I had seen the 2017 London marathon was on my birthday. I broke the news to my very patient wife Leanne, that running the London marathon seemed like a great birthday present and so we started the planning.

Whilst Sarah’s and my training programs were very different, our goals were the same. We both have severe lung disease but Sarah has the added burden of needing supplementary oxygen to complete the race. We had both decided to run the London marathon for the British Lung Foundation’s “Team Breathe”. Running for Team Breathe was an obvious choice.  We could raise awareness running for a lung foundation and we could raise funds for research. 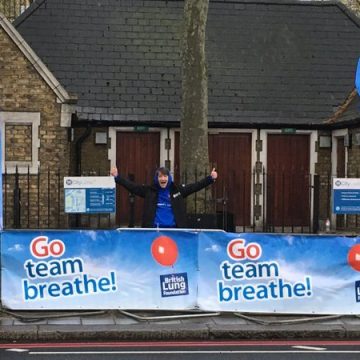 My training hadn’t gone to plan for this marathon preparation as most of my training program was through a very hot and humid Australian summer, not the best environment for someone with lung disease. I wasn’t expecting to break any records, but I was hoping running the race in cooler temperatures would assist me.

My last lead up race back in Australia gave me some hope the London marathon may go well for me, as I recorded a personal best time for a half marathon. I’d been in contact with Sarah who’s training had been progressing well; there were some issues regarding her oxygen requirements but she had managed to sort them out.

I arrived in London 10 days before the marathon and had hoped to catch up with Sarah before the race. Timing wasn’t on our side as I had committed to talking to patient groups and health care professionals in the week before race day, our catch up would have to be after the race.

Before I knew it race day had arrived and so had the butterflies in my stomach. I had hoped for a cool overcast day with no rain and looking out the window on race morning brought a smile to my face. Time for a bite to eat and then off to catch a train to the start line. Apart from running a marathon there was another challenge today. I was racing against a good mate from London, Dave Lawrence.

Dave is a young fit marathoner who’d run the London marathon many times.  This time was different as he had to race me. How does that work? Dave has great lungs, mine are faulty. We devised a handicap system based on mine and Dave’s average pace for a half marathon. What that meant was Dave had to beat my time by 96 minutes. If we both ran up to our previous pace this was going to be a close race.

I met Dave at the train station so he could show me where I had to be; as you can imagine things can be a little daunting trying to find your away around tens of thousands of competitors. Before long I was at the race start raring to go.  I nervously stood waiting for the start and I was looking around for any fellow team breathe members.  As I scanned the crowd I spotted I woman in a team breathe shirt heading over my way. When she turned side on her identity was blown, she had an oxygen backpack.  Amongst nearly 50,000 people I’d spotted Sarah. I went over to where she was and the emotion hit both of us, bumping into each other at that moment when nerves were flooding through us was just the medicine we needed.

The gun fired and Sarah, myself and thousands more were off to a very slow start. The reality is an event with so many people means a human traffic jam. It took about 30 minutes from the start of the race to when Sarah and I crossed the actual start line. The advantage of that was we were able to have a great chat and get to know each other better face to face, rather than via email. 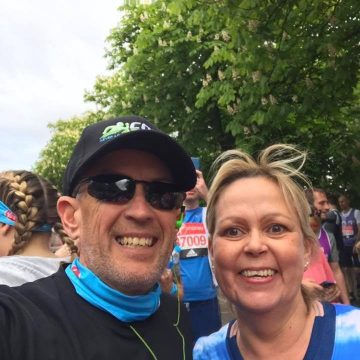 Once we crossed the start line we wished each other luck and said our goodbyes.  We had different race plans which meant we couldn’t stay together. Probably for the best as I suspect we would have been so entrenched in conversation the race we were in may have been forgotten.

I’ve done quite a few races but none like the London marathon. To me races can take on a personality of their own, this was definitely the case on that day. During the race I would pass a camel, a rhinoceros, a man skipping with tambourines strapped to his legs, a man strapped to a cross and several other costumed competitors. However, without doubt the strangest thing I’ve ever seen in a race – a man running in bare feet with a washing machine strapped to his back! The London marathon is the biggest charity marathon in the world, which means people doing all sorts of crazy things to raise money for their chosen charity. That coupled with the English sense of humour gave this race its own personality.

My race started well and my goal was to run the race in around five and half hours. Marathons have pace runners which are competitors who agree to run the race at a given pace to aid other runners with their time goals. I decided to try and run with the five and a quarter hour pace runner. My thinking was to keep with him as long as possible and hope that would get me close to my time goal.

I wasn’t expecting to stay at this pace for too long as it was a quick pace for me. Half way through the race at 13 miles and I was still with the pace runner. My breathing felt better than previous races and my energy levels were high. Truth is I was hoping for exactly this – my new marathon program was working. However, that’s a subject for my next article and a subject that will cause some controversy.

There were many highlights while running the London marathon but the ones that stand out are running past the Cutty Sark the worlds sole surviving tea clipper. The noise from the crowd coupled with the sight of this ship was a real boost. Running over the Tower Bridge and into Thames Embankment was deafening with crowds cheering and music blasting out over the Thames river.  Heading down towards the finish area the course takes you past Big Ben, which is like running into a stadium full of people. The close proximity of buildings makes the crowd noise echo through the streets. The final dash to the line takes you past St James’s park down to the Victoria Memorial in front of Buckingham Palace, the cheering through here would make anyone breakout in goose bumps. I then head up The Mall to the finish line and was ecstatic to cross the finish line in 5 hours 22 minutes, a PB!

For me the race is over and I was one very satisfied runner. My thoughts turn to Sarah and how she was going. I tried to find out via a tracking app on my phone where she was but with no luck. The good news is that Sarah finished the race and become a marathoner with a smile I’m sure is still stretching across her face.

Two respiratory patients start and finish the London marathon with memories that will last a lifetime. What about Dave and my race? Between you and me, I beat him. Dave ran a very respectable 4 hours 29 minutes however on handicap I finished 43 minutes ahead of him. A win to the Aussies, but more importantly we raised funds for research into lung disease and had a great time along the way! A big thank you to the British Lung Foundation and my fellow team breathe members, the support and friendship you gave me will always be cherished!  I cannot forget to thank Dave for being such a good sport and getting on board for a such a worthy cause.  The banter he and I shared throughout our training campaign made the training, which can be a bit mundane at times, a little more light hearted and fun.  Dave and I shared a beer the following day and talked about our London marathon experience and when we will race each other again.