Standing on the sand at the start of an Ironman event is a daunting experience whether you are an elite athlete or an athlete with COPD. I’m about to jump in the ocean and swim 3.8k (2.4 mile) with 30% lung function and the ocean on this morning resembles a washing machine!

As Ironman participants we choose to race in an event which on a good day can punish you for up to 17 hours, on a bad day it can be pure torcher! For me I’m always praying for perfect conditions, but on this day, it was not meant to be. The starter sends me on my way along with thousands of other athletes, like it or not I had to deal with what lay ahead, as did everyone else daring to complete Ironman Cairns.

The swim was the leg of the race I had felt the most confident with as my swim training had been good. My confidence was short lived as I rounded the first swim marker and headed into a strong current. I knew this swim was going to test me and I wasn’t wrong. As I struggled through the first part of the swim, I was becoming increasingly breathless from pushing into the current. Not only was the current slowing my progress it was pushing me off the course. 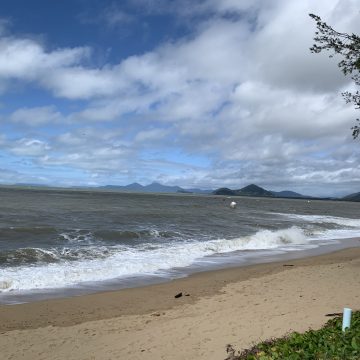 As I arrived on the sand at the end of the swim leg my Garmin watch showed my swim time was 1hr 45 min, this was my slowest swim time ever. I was exhausted, breathless and disorientated. What I discovered the next day when checking my race statistics was, I had actually swum 4.3k, an extra 500 meters. The current pushing me off the course so many times had meant swimming further than I needed to.

Suffering the effects of hypoxia was not the way I was planning to start my 180k (112 mile) cycle. I had mounted my oxygen machine on my bike and couldn’t wait to hook up to it. My son Curtis was cycling with me as he was carrying my spare batteries for my oxygen concentrator. I told him I need to take it easy at the start so I could get my oxygen levels under control and reduce my breathlessness. After about 30 minutes of gentle cycling I started to feel more composed and able to keep going.

Cairns Ironman cycle course is one of the most spectacular courses as it travels the Australian coastline taking in spectacular ocean views. The course also has its fair share of hills and strong winds as its in close proximity to the ocean. The first 4 hours of the cycle went relatively smoothly as I had the wind behind me. However, due to the toll the swim had taken on me I had to raise my settings on my oxygen concentrator. This meant more drain on the battery, something which became an issue as the race went on.

Heading back on the second half of the first lap was taxing, cycling into a headwind as well as the challenging hills were taking their toll. Half way up the last hill climb before the end of the first lap my concentrator stopped, I had run out of battery power. I couldn’t stop cycling as to do so on a hill would have meant falling off my bike. I made it to the top of what is called Rex’s Lookout, the highest point of the course.

I took time to recover after changing my battery as I was struggling to breathe. I said to my wife Leanne, if at any stage of the race I felt my health was suffering I would pull-out. I hadn’t reached this stage yet as I was recovering quite well between efforts. Leanne and my mother were at the turn around for the start of the second lap. I told them things weren’t going well but I would press on.

The start of the second lap with the wind, once again behind me, was a relief. We were still maintaining the pace we had planned but fatigue was setting in. Turning for home on the second lap I was not sure if I could finish the bike leg, I was faced with another 68k into the wind and another climb up Rex’s Lookout. By now I had my oxygen concentrator set on its maximum level and I was churning through the batteries.

That final 68k was brutal, my son was trying to shelter me from the headwind as much as possible, but I was struggling.  About 30k from the finish of the bike leg I had a battery change – it was then I realised I may not have enough battery power to complete the next leg of the race, a 42.2k run. While I was desperate to finish the race, the reality was starting to hit home.

As I struggled through the last 5k of the bike leg I had decided I would start the run leg but not finish it. I knew it would take me 6 + hours to complete the run leg and I only had around 4 hours of battery life left.

This was to be my last Ironman event and while I could have pulled out of the race at the completion of the bike leg, I decided I wanted to experience the crowd and atmosphere on the run leg for the last time. I couldn’t run or jog, I could only manage a slow walk. After completing around 10k of the run leg feeling very breathless and fatigued, with rain starting to fall I decided it was time to call it a day. 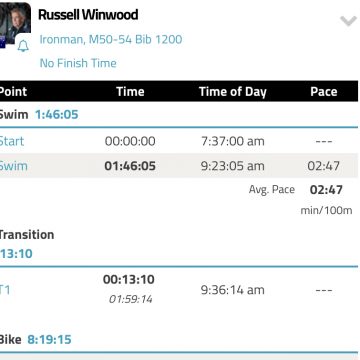 While this wasn’t the way I had planned to finish my race, I had to put my health first. I had managed to raise $7300 for Lung Foundation Australia so there was some upside for my race. Looking back, I couldn’t have changed anything to avoid what happened on the day. I have completed the race previously which has softened the blow of not finishing.

While Cairns was my last full Ironman, I suspect I’ll be having a go at a Half Ironman sometime in the future. But for now, it’s back to running marathons and showing the power of exercise for lung disease.

P.S. – Until, as my wife Leanne says – I find another cockamamie thing to do!

11 responses to “Cairns Ironman with COPD”