When I spoke with Russell about the program for the New York marathon, it was just over 6 months away which can be a long time to train for an event. I had to take into account Russell having COPD when structuring the program. This discusses some of the key elements of Russell’s marathon program.

Know your body and limitations. When designing programs for any client it is important for me to understand what they can and can’t (shouldn’t) do. Training should be an “enjoyable” experience. Yes there will be some pain along the way, but you should be confident that you are not damaging yourself and be unable to continue. When you finish a session, you should feel happy that you have given your best and feel good about what you have just done – if it isn’t enjoyable why do it?

The two main things we agreed on that we would closely monitor were his oxygen levels and a sustainable heart rate that he could maintain to enable him to train safely. Also in Russell’s case, we didn’t have to adapt the program for any residual injuries which is a good way to start a program. With Russell’s experience in training over the years with COPD, he knows and understand the triggers and signs when things are not right with his breathing. He may still get some anxiety, but he knows how to deal with this and prevent any further risk.

This is the most important part of exercising with a condition like COPD. More so than others, you will be getting breathless quickly and feel uncomfortable so you need to know how to cope with this and either stop your exercise or be confident you can continue. It will take time but eventually this will be second nature to you much like it is with Russell. I trust that when Russell says he is okay to continue or he that can’t, that he knows himself best.

Know what you are capable of and learn and practice what you need to do to help yourself train safely.

Any trainer will tell you there is a massive difference between training someone who is motivated and wants to be trained as opposed to training someone who just turns up and goes through the motions. There is also a difference between “that person” who has to exercise (e.g. because their doctor told them it would be good for them) and the one who truly wants to change their lifestyle because they know the benefits they will be getting for the rest of their life.

To get the most out of anything you need to WANT to do. Again Russell has the motivation to exercise as part of his lifestyle and is not doing it for the sake of doing it. He also doesn’t use COPD as a reason (read excuse) why he can’t or shouldn’t do anything. This made my job so much easier.

Having the Motivation makes it so much easier and enjoyable for everyone.

Russell was motivated and wanted to achieve the goal of RUNNING the New York Marathon. Yes he had completed ironman triathlons previously which involved marathons at the end – So what was the big deal here. He shuffled and walked to complete these marathons, but he had never RUN a marathon before. That was the subtle difference here. We also gave Russell a time goal – 5hrs 45min. This was a stretch target but definitely achievable.

Main goal is always to finish. Set goals that are realistic and achievable.

When designing the program I researched what the course would be like and took into account how long the program was to ensure there were built in recovery periods, which are important both physically and mentally. The longer the program the more challenging it is to stay fresh at the end. I built in some variety each week as well as cross training days, so it wasn’t all about running.

The basic structure involved 4 runs per week – consisting of a mix of these types:

I had three phases with recovery periods at the end of each phase:

Before building a house you need a foundation – so is the case with endurance events. You need a good solid foundation to build on. This phase consisted of running regularly and slowly increasing distance so Russell’s body could start adapting and conditioning itself for what was about to come. Russell had picked up a niggling calf injury during this phase so we had to adjust the program a little to ensure Russell could continue. Not a major problem.  Milestone of this phase was to just finish a half marathon and get a baseline of time – which was completed in just under 3 hrs. Something to build on.

Recovery period (reduced long runs including a week off)

Now we had a foundation on which we could build strength and speed. For this I alternated each mid-week between strength and speed work. Speed work involved intervals of varying lengths and intensity.  These could range from 15sec efforts up to 500m efforts depending on the session. Strength work incorporated hill sessions and step-ups and lunge jumps (changed to lunges). These sessions were shorter but more intense meaning Russell really had to monitor his breathing and Max heart rate.

This phase was going to be the tough phase where there was an intense period of long runs for six weeks culminating in a 33km run before starting to freshen up for the marathon. The second week into this phase was another planned half marathon – result was 15 mins quicker than the end of the first phase. Very encouraging but still needed to focus on the next four weeks and hit the targets without injuries.

The day of the longest planned run (33km) was a very hot day – conditions that we would not experience in New York. Challenge was to just finish this, get the kilometres in the legs, and recover with no injuries. Once this was completed we would be reducing the long runs for the next few weeks as we started to freshen up for the marathon.

Russell was using a Garmin 920 xt and his results were immediately uploaded to his account on the Internet. I had access to this so there was no hiding for Russell. I could see if he missed any sessions, if there were any short sessions etc as well as some of the stats I was interested in – distance, pace, time and importantly Heart Rate. The trend that we noticed was that Russell could sustain a higher HR (than we would have liked) for a long duration, and achieve the pace needed to hit his targets. These were also Russell’s more comfortable sessions. We checked this with his doctor during his testing and then adapted as per the advice.

It is important that you always factor in recovery periods / sessions in your training. You need to allow your body and mind time to recover from what you are putting it through. Recovery activities include less intense sessions, stretching, cross training (i.e. swimming) massages etc.

If you miss a session – you miss it. It is important to not double up the next session. Accept that you have missed the session, refocus and keep going.

Be positive and have fun

This is what it is all about. It should be an enjoyable and rewarding experience. Especially running in another country and city with the support and atmosphere of the New York Marathon. Always remain positive and enjoy what you have set out to do. Some say the harder the goal the more rewarding the satisfaction of achieving it.

Reflect on your achievement

It is important not to beat yourself up if you miss targets. There is a lot of work to get to the start line healthy – this is the biggest challenge – once you are there all your training is done.  At the start line it is too late to wish you had done more. As long as you have been honest with yourself throughout the training and given what you can, then you can only do your best from this point forward. Have confidence in what you have done and from here the end result is what it is.

Russell achieved his goal of running and completing the marathon without using oxygen. He missed his time goal of 5hrs 45 min but he had fun, took photos along the way and enjoyed every minute of it.

Congratulate yourself and go and celebrate. To me that is what it is all about and is mission accomplished. 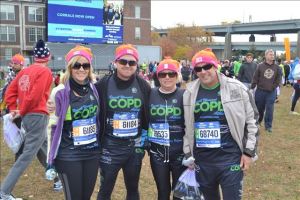